The xylophone is an incredibly old instrument, with a complex past. There are many mallet percussion instruments that the xylophone could have evolved from, making the history very difficult to trace. The xylophone has changed over thousands of years from its primitive roots into the much more refined instrument that we call the xylophone today.

A modern form of the Ranat
The origin of the xylophone is somewhat controversial, since the xylophone is speculated to have been created separately in both Asia and Africa. However, according to the Vienna Symphonic Library, the first instruments related to xylophones appeared in eastern Asia in around 2000 B.C., and then they spread to Africa. This was an instrument called a harmonicon, which was simply hanging wooden bars that could be struck to create sound. Additionally, a similar instrument called a Ranat was said to exist in Hindu regions.

A gourd-resonated xylophone
The first definite proof of the xylophone's existence was found in the 9th century in south-east Asia. These primitive instruments were as simple as wooden bars laid across the player's legs. The design began to evolve as resonators were added to the bottom of the bars. These increased the sustain of the notes. The early resonators were hollowed out gourds. Additionally, the instrument was placed on a stand.

Ancient African xylophones
In the 14th century, the xylophone began to gain popularity. Throughout the years, many different materials, such as bamboo and natural rubber,  were used to construct different types of xylophones and mallets. This created many different variations of the xylophone, many of which still exist today. Some of these include the Mbila, Gyil, Marimba, and Gambang. 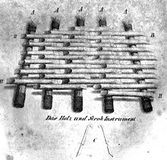 Gusikov's version of the xylophone
Although the exact date is not known, the xylophone was introduced to Europe sometime during the Crusades. The xylophone became very popular in Europe due to its use in folk music. However, these xylophones were still very simple and did not have resonators. Many different designs were created in Europe, including the creation of Michael Josef Gusikov, which was a four-rowed xylophone, and used the same notes as the piano. This was a major step towards the modern xylophone, as Gusikov was a well known virtuoso, and exposed the instrument to European concert audiences.