The snare drum is an incredibly old instrument, as its roots extend back thousands of years. It has evolved immensely into the current version of a snare drum. Much of the snare drum's change and popularity was caused by its use in the military, which plays an important role in the snare drum's history. Below you will find some of the most significant information about the history of the snare drum.

Ancient drum drawings
The concept of drums is speculated to be nearly as old as mankind itself, since any object which is struck to produce noise can be considered a drum. However, the first documented evidence of drums is around 6000 B.C in Mesospotamia. This drum was simply a square shaped piece of clay.

The Tabor
Drums evolved over the years into more advanced designs. Tribal people discovered that they could use animal hide (usually calf skin) that stretched over the drum, called the drumhead, to create more noise. The first drum related to the snare drum was created in Medieval Europe around 1300. This was called the Tabor. The Tabor was a double-headed drum that only had one snare drum strand across the bottom of the instrument.

A field drum
The Tabor started to become much more popular in the 1400s. This was mainly because they were used for military purposes, mainly in the Swiss or Ottoman armies. The drum had evolved into a larger drum that could be carried by a shoulder strap. It was called a "field drum". By the 1500s, the English had also begun to use a form of the field drum, although it was called a drome (similar to the drum's modern name).

Modern snares
In the 1500's, the snare drum still had a rattling sound when struck. This began to change in the 1600s, as screws were attached to the drum that could hold the snares down. This created a higher pitched sound and is similar to the tight "snap" produced from modern snare drum. Additionally, in the 1800s, the snare drum became smaller and began to be made out of brass. This gave the drum an even crisper sound.

A snare strainer
The snare drum started to be used in classical music and military corps. This cemented its place as a popular percussion instrument. The last major changes to the snare drum were the use of coiled wire (metal) for the snares, and the addition of the throw off strainer, which can change the sound of a snare drum to one of a tom-tom. 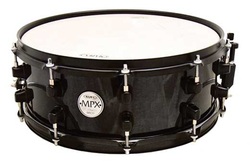